NVision’s 3D laser scanning captured the geometry of vehicles' roof profiles and the data was incorporated into the CAD files used to create the custom-fit racks.

NVision’s 3D laser scanning captured the geometry of vehicles' roof profiles and the data was incorporated into the CAD files used to create the custom-fit racks. 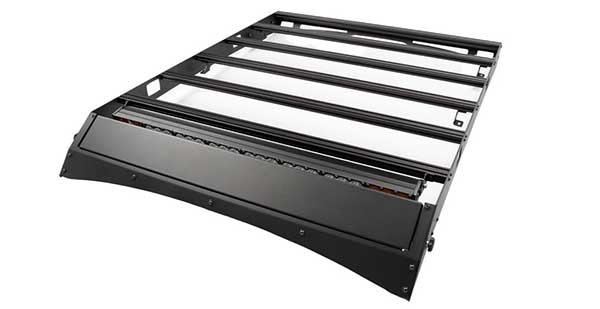 “Without the scans we would have extended our R&D and production time by 300%,” says Chris Pelley, vice president of Operations and Engineering at the Fort Worth, TX-based company.

Started as Cali Raised LED in 2014, Hamar Industries was incorporated in 2018 and is a job shop for aftermarket vehicle accessories and custom metal fabrication, including laser-cutting, bending, welding and more. One of the company's services and specialties is building custom-fitted roof  racks.

Roof racks are designed to support a large amount of weight with a minimal number of contact points, they must be engineered to minimize wind noise, reduce drag, and withstand high speeds, sudden stops and turns. The most important element is getting the right fit, according to NVision. To accomplish that, it’s necessary to determine, as accurately as possible, the precise geometry of the vehicle’s roof and that of any possible interferences.

“The contour of the roof is important for a great overall fitment,” says Pelley. “Location of all mounting locations is also very important to making the roof rack install easily for our customers. We are also looking to avoid conflict with any factory accessories or features like sun roofs, windshield wipers, rear hatches and doors.”

Hamar Industries first considered using 3D scanning while developing custom roof racks for three Toyota pickup and SUV models; the Tacoma, the Tundra and the 4Runner. Because these racks fit extremely tight to the roof and Hamar needed an accurate roof profile in about 12 spots, the company determined that 3D laser scanning would provide the most geometrically correct representation of the roofs.

Hamar contacted fellow Texas firm NVision, Inc., a 3D measurement and engineering services company with a 30-year history of work for the automotive and transportation industries. NVision’s work in the auto/transportation sectors includes the rapid design and reverse engineering of motorcycles, autos, trucks, trailers and other automotive products.

NVision technicians performed scanning onsite at Hamar Industries, focusing on the vehicles' roofs down to the tops of all the windows. Over the course of roughly four business days, NVision engineers scanned the roofs of three vehicles: the 2017 Toyota Tacoma, the 2015 Toyota Tundra, and the 2018 Toyota 4Runner using the company’s own HandHeld Scanner. “NVision was very professional and responsive to changes and our scheduling needs. They were a pleasure to work with,” said Pelley.

The handheld scanner is a portable scanning device capable of capturing 3D geometry from objects of almost any size or shape. The scanner is attached to a mechanical arm that moves about the object, allowing the user to capture data rapidly with a high degree of resolution and accuracy. As the object is inspected, the scanner generates a point cloud consisting of millions of points, each with x,y,z coordinates and i,j,k vectors. These points comprise an exact duplicate of the object’s surface, down to the most minute detail.

The scanner comes with integrated software that is used to convert the point cloud to an STL polygon and an optional tripod provides complete portability in the field. Intuitive software allows real-time rendering, full model editing, polygon reduction and data output to all standard 3D packages.

NVision technicians performed four scans of every roof with each scan comprising a quarter of its surface (driver’s side front, passenger’s side front, driver’s side rear and passenger’s side rear). They then did a basic post-processing clean-up (removing “noise,” or unneeded data, etc.) and aligned, or “stitched together,” the different roof scans to produce a composite point cloud of each roof, using reference spheres.

After completing the scanning, NVision polygonated the raw point cloud data into an STL file. The STL file was used as a template to create design intent CAD models. The models were delivered in IGES and STEP format, which is a generic CAD file, importable into any CAD software. Hamar imported the IGES/STEP models into their in-house CAD software to interface with models of final roof racks to check for form, fit and function.

“NVision provided us with the 3D CAD models we needed to launch three product lines,” Pelley concludes. “Having the quality scans import seamlessly into our in-house CAD software made design and testing very easy and very fast.”