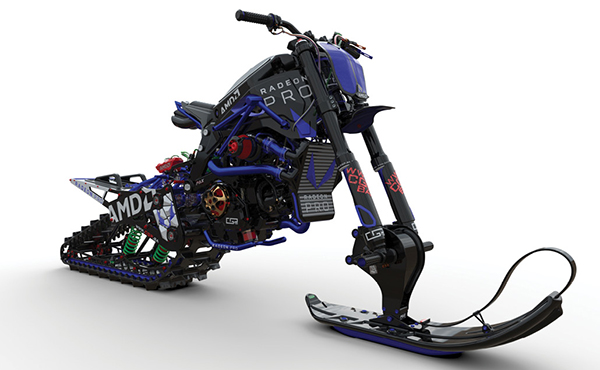 SolidWorks makes use of software technology from both NVIDIA and AMD to accelerate rendering. Images courtesy of AMD.

Making the Case for a Workstation-Centered Workflow
The heart of an efficient engineering workflow is a professional workstation.

Ray tracing has become the go-to technology for producing physically accurate rendered images in product design. The process traces the path of light at the pixel level, factoring in lighting, color, textures, shadows and real-world refraction effects. Though accurate, it is also a compute-intensive task that takes hours or even days depending on the model or scene.

One reason rendering physically realistic models is a lengthy task is due to denoising, or the process of removing artifacts that appear during the rendering process. Given enough time, any ray tracing process will remove all the “noise” artifacts that accumulate during the rendering. Depending on the model and the computer, such detailed ray tracing could take hours for the most complicated models and days for an animation made from the model. For final images suitable for C-level presentations or marketing, the wait was worth the time. In day-to-day use, it meant designers and engineers generally stayed away from making photorealistic images unless absolutely necessary.

In the past couple of years the two graphics technology leaders, AMD and NVIDIA, have deployed artificial intelligence (AI) to speed up ray tracing. Both companies now offer smart denoising for ray tracing. Applying AI to denoising has drastically reduced the time it takes to get photorealistic models.

Dassault Systèmes SolidWorks is one of several design software companies to take advantage of this new technology. They incorporated the NVIDIA OptiX software development kit into SolidWorks Visualize.

“You can expect the same photorealistic results 10x faster,” he wrote. “Not only does it help your final renders finish 10x faster, you can also enjoy this dramatic speed-up while preparing your Visualize scenes as well.”

The line of V-Ray rendering products from Chaos Group also uses NVIDIA technology, as do the Arnold and VRED renderers from Autodesk. The product design rendering tool Luxion KeyShot has historically been a CPU-only renderer, but will release a beta version soon that adds NVIDIA OptiX technology, supporting graphics processing unit (GPU) rendering for the first time.

Both NVIDIA and AMD offer software-level AI denoising that other vendors can incorporate into products. NVIDIA goes a step beyond with AI-based rendering included in its most recent generation of GPU boards.

AMD ProRender is an open standards rendering software toolkit that vendors can incorporate into products. “Essentially the primary purpose of this tool is to accelerate rendering so that when a designer or engineer is looking at a model, the images resolve right away. Rotate the model and it is there,” says Glen Matthews, a senior manager for software product management at AMD. “The purpose is not final frame rendering, but real-time visualization.”

AMD views rendering as a process with four levels of complexity. The first is wireframe or rasterized viewing in CAD. The second level is hybrid rendering, where the rasterized lines and solids are given more detail. Ray-traced elements are often placed on top of the rasterized geometry to provide a bit of added realism. The third level is biased rendering, which includes the use of AI for denoising. The final level is fully path-traced images, which are both photorealistic and physically realistic. AMD refers to the process of taking advantage of all four levels as Full Spectrum Rendering. 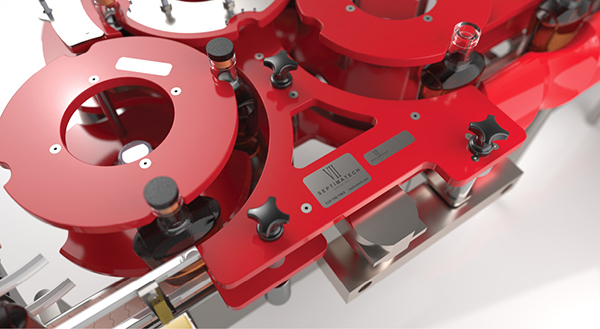 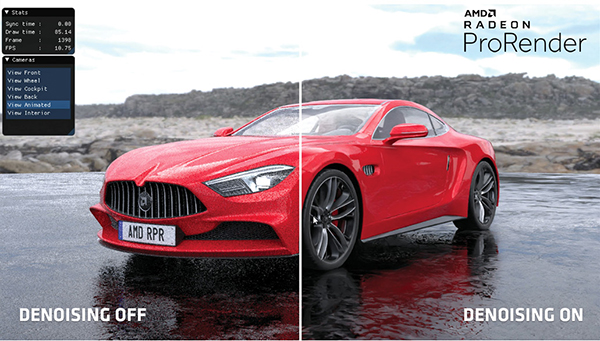 Vendors with software used in product design and who have incorporated AMD ProRender technology into their products—either directly or via add-on plug-ins from AMD—include Autodesk (3ds Max, Maya); Nemetschek Maxon (Cinema 4D); PTC (Creo); Dassault Systèmes SolidWorks (SolidWorks 2016 and higher); Blender; and Unreal Engine. Software vendors in architecture, engineering and construction (AEC) and fashion design are also using the technology. ProRender works with any modern GPU, from AMD and NVIDIA, so using software running ProRender or installing a plug-in is an option for designers not ready to upgrade their workstation for hardware-based AI denoising.

“The democratizing of rendering is our goal,” says Matthews. “Most CAD users are not rendering but they should. We want to make it as easy as possible. [Rendering] technology allows designers to make decisions in real time.”

A Neural Net for Rendering

NVIDIA offers its OptiX SDK to software vendors, but also offers hardware-based ray tracing in its newer GPUs. Designers can either use software with OptiX, or for maximum ray tracing firepower, upgrade to a newer NVIDIA GPU or a custom workstation built for NVIDIA’s new RTX Studio specification. NVIDIA also sells the DGX Station, which the company says “will give designers, artists and other content-creation professionals the rendering capability of 150 standard CPU-based servers.”

NVIDIA created its denoising technology by training a neural net with 20,000 rendered images. Some were rendered to a high level; others were “low quality stuff,” says Andrew Rink, head of marketing strategy, AEC & Manufacturing Industries at NVIDIA.

“Is it guesswork?” Rink asks. “No, the software makes an intelligent decision,” regarding what is noise and what is a correctly rendered pixel. “The primary purpose of the tool is to accelerate the [hardware] render so that when a designer or engineer is looking at a model, the images resolve immediately.”

For product design, the primary purpose of AI-accelerated rendering “is not the final frame but real-time visualization,” says NVIDIA’s Brian Harrison, director of Emerging Technologies Product Management. “It is for interactive use. It allows someone dressing a scene to adjust materials, lighting and objects, and then see results in an interactive fashion.” The image may be a bit “watery” for a second, Harrison says, “but it gets great results—90% of the job—10 times faster.”

A designer can make decisions before they render a final scene, Harrison says. “Instead of looking at dithered dots taking a long time to resolve, the denoiser gets you to a real image so fast you can work in real time. People can work at the speed of their brain.”

Harrison has been asked if there is a time when the user should shut off the denoiser. “There really is no reason to turn off denoising,” he says. “Glass might look watery at first, but it resolves so quickly it doesn’t affect workflow.” Harrison adds that if a designer is creating an animation, working through the flow of images, it might be the only situation where he would shut denoising off. “Interactive quick playback might be the one time you turn it off. It is not a negative, just an example of when not to use it.”

To NVIDIA, the democratization of rendering comes from the ability to provide affordable real-time photorealistic and physically realistic rendering to every person in product design, not just an expert. “Rendering can be part of the workflow now, not a separate task,” Harrison says.

Editors’ Chat: Rise of Cloud Platforms, AWS-Powered Simulation, News from Formnext, and More
DE editors discuss the news of cloud platforms from AU, AWS-Powered simulation, additive news from Formnext, and more
Boosting CAD Interoperability
Consolidation and change within industries that use engineering design software raise questions about CAD software interoperability.
What’s New in Arnold?
Autodesk product enables optimization of rendering and much more.
Electronic Design: Boosting Lifespan and Repairability
The increasing problem of electronics waste and demand for affordable tech call for devices that can be repaired more easily and inexpensively.
Engineering the Perfect Sound
Researchers and musicians alike are turning to FEA and CFD to help with instrument design.
Autodesk Company Profile