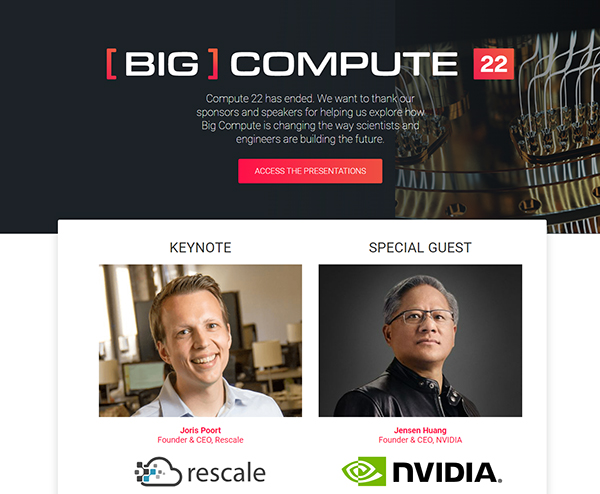 Asking the Right Questions About HPC for Simulation
The answers to those questions may shed light on what services are most needed.
Making the Best Choice for High-Performance Computing (HPC) for Engineering Simulation
There are a lot of options for HPC to boost simulation performance. TotalCAE offers solutions...
Altair Leads Seed Funding for Xscape Photonics with $10 Million Investment
Xscape is a startup that develops tech for photonic chips for high-bandwidth connections inside data...
Intel Debuts Fast Mobile Processor
New 13th Gen Intel Core mobile processors drive performance for more than 300 laptop designs, company...
More HPC

Rescale empowers engineers and scientists to automate and optimize their workflows on the latest specialized HPC infrastructure available. Governed by best in class security and reliability, the Rescale platform was...
Rescale
Company Profile

Can AI give you reliable computing configuration suggestions? The executives at Rescale, the host of last week's Big Compute 22, believe it can. Accordingly, it's launching a new Compute Recommendation Engine.

Joris Poort, Founder and CEO of Rescale, said, “We are announcing our Compute Recommendation Engine, created to optimize the performance of any workload across any compute architecture. The engine leverages a data-driven and AI-driven approach to performance optimization. It shows over 90% validation accuracy in identifying computational bottlenecks in workloads, and in assessing the scalability of a job, it has over 95% accuracy.”

The Compute Engine is the foundation for new tools such as Job Optimizer, Performance Profiles, and Performance Optimization, according to Edward Hsu, Rescale's Chief Product Officer. He said, “The Rescale Compute Optimizer automatically identifies best performing architecture and configuration based on the workload in real time ... Rescale can also recommend how much computing should be used for optimized performance. Workload performance is determined by the software used and the models processed.” 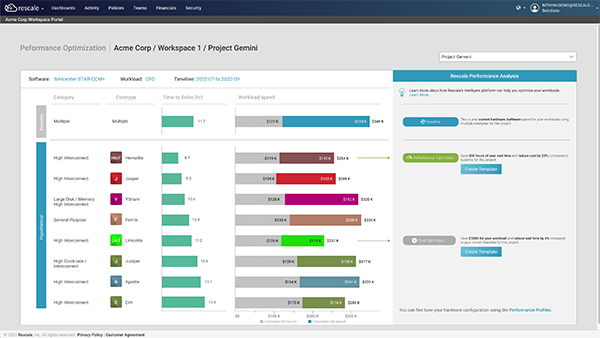 The Rescale Performance Profile allows users to “analyze the performance of specific models and proprietary workloads, build their own performance intelligence, to find the best time to solve and the cost tradeoffs,” said Hsu. “The Recommendation Engine guides users on which architecture they should investigate. Customers have been able to identify performance improvements of 30% or more just by developing their own workload performance profile.”

Rescale customers can get early access to these features (currently in Private Beta). General availability is expected early next year.

Hsu pointed out, “Today’s HPC needs are Not just about running batch jobs but also about highly visual interactive simulations.” In response, the company is announcing the Rescale Elastic Cloud workstation.  The virtual workstations are offered to large companies as well as smaller shops. Pricing depends on the computing architecture required, but, according to Hsu, the cost works out to roughly “a few pennies per core hour.”

NVIDIA CEO Jensen Huang, a special guest at Big Compute 22, hailed the rise of AI-accelerated computing. “AI is turbo-charging science and engineering. “Fusing principled and data-driven methods, physics-ML AI models let us explore our design space at speeds and scales many orders of magnitude greater than ever before,” said Jensen Huang, NVIDIA founder and CEO. “Rescale is at the intersection of these major trends. NVIDIA’s accelerated and AI computing platform perfectly complements Rescale to advance industrial scientific computing.”

At Big Compute 22, NVIDIA and Rescale announced they are teaming up to integrate NVIDIA's AI platform into Rescale’s on-demand HPC offering. 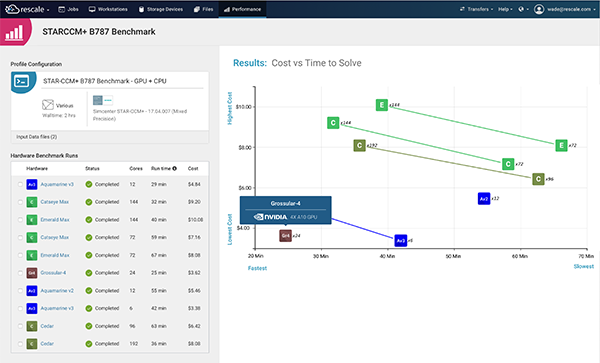 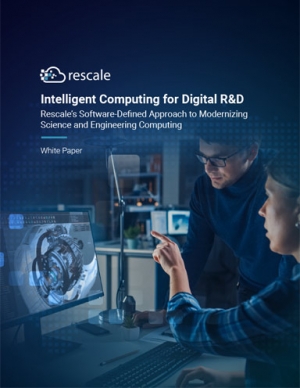 Intelligent Computing for Digital R&D
In this white paper, we present the core ideas and new trends in Software-Defined Compute, and how Rescale automates SDC for IT and HPC organizations.
Editor’s Picks: November 11-17, 2022
One of the picks will be chosen as DE’s Editor’s Pick of the Week.
FREE WEBINAR MARCH 29 - The Driving Forces Behind Cloud-Based Engineering Simulation
In this webinar, Rescale presents exclusive research on cloud-based engineering trends.
Sponsored Content
Cloud HPC Rising to Meet New Workplace Demands
With many organizations redefining the future of work and collaboration, cloud-enabled teams and tools are increasingly the lifeblood of business continuity.
How to leverage cloud computing resources for automotive manufacturing
The automotive industry has routinely used high performance computing (HPC) throughout the automobile design and development process. Download this paper to learn more.
Full-Stack Economic Optimization for Big Compute
This whitepaper revisits the metrics that obscure all-in costs and offers a holistic framework for measuring and optimizing for Full-Stack Economics Optimization (FEO) based on specific business objectives.
Rescale Company Profile