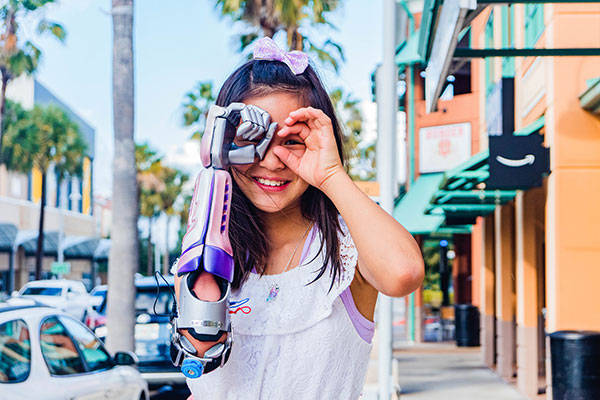 A child shows off her new prosthetic arm from Limbitless. Image courtesy of University of Central Florida Research Foundation, Inc. and Autodesk.

Many people may view a wheelchair or a missing limb as a disadvantage, but some engineers see endless possibilities. For them, the anomaly is a chance to rethink form and function, perhaps to invent something superior to what is missing.

At the nonprofit Magic Wheelchair, volunteers contribute their ingenuity and physical labor to transform wheelchairs into unicorns, hot rods and starships and bring children’s fantasies to life.

At Limbitless, also a nonprofit, designers build custom bionic arms infused with technology and character equipped with electronics and decorated with floral patterns. These are just two examples of social enterprises that combine technology and creativity to change lives for the better.

Ten-year-old Freyja Christian uses a wheelchair to get around. She also uses her imagination to travel with the help of fairy tales. In her letter to the Magic Wheelchair, she specifically requested “a princess castle or a carriage ... flying mermaids, cats and dragonflies.”

For Freyja, the wheelchair brings independence. For Annie Cheung, senior manager, Product Definition, SolidWorks, the Magic Wheelchair is a vehicle for creativity. She and a team of volunteers at SolidWorks have worked on previous projects for the organization. Freyja’s wheelchair would become the team’s third build.

Previous collaboration between SolidWorks user community members and Magic Wheelchair resulted in, among others, a movable throne, inspired by the “Be Our Guest” song from “Beauty and the Beast;” and a “Star Wars”-themed wheelchair, inspired by “The Mandalorian” TV series. 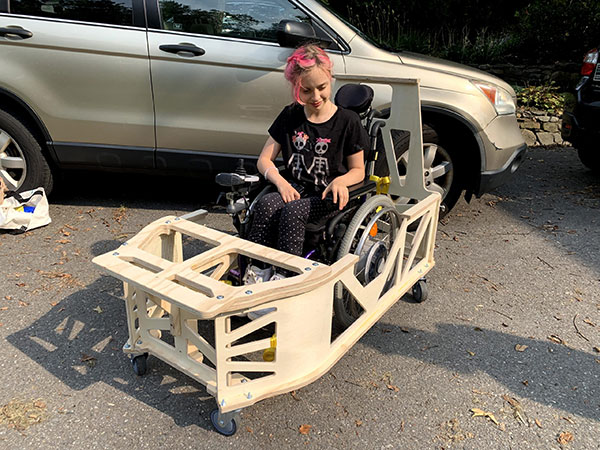 Freyja sits in the frame that will eventually become the base for her moving castle. Image courtesy of SolidWorks and Magic Wheelchair.

In the middle of the pandemic, the team began to design Freyja’s set piece. The team used 3DSwym, a social media-style collaboration platform by Dassault Systèmes.

“We were extremely cautious to reduce the team to only the essentials,” says Chinloo Lama, director of UX in communication, collaboration and visualization, SolidWorks.

“The 3DSwym community allowed us to share ideas, picture, videos and diaries of prototypes and build process. The dashboard gave us a home base to access critical information about Freyja’s likes and personality. We drew inspiration from the content,” she adds.

The primary 3D modeling was done in SolidWorks CAD. “We used SolidWorks CAD to generate the G-code that was needed for machining the different pieces. A lot of the elements for the costume came to life because we had the G-code,” Cheung says.

For the army of winged fairies and dragonflies on the wheelchair, the team 3D-printed them and magnetically mounted them with embedded radiofrequency identification tags and lights to turn them on and off as desired.

“We needed to use SLA [stereolithography] printing, which can capture a lot of the [design’s] smaller details,” Cheung says.

The dragonflies were modeled from scratch in xShape, a 3D sculpting program.

“You basically start with a digital piece of clay, then push and pull it,” says Jordan Tadic, senior solution consultant, SolidWorks. 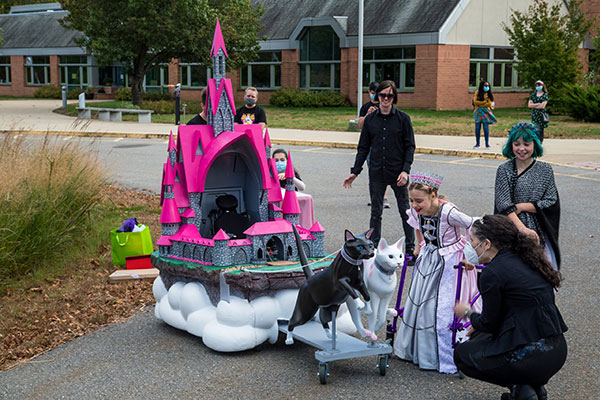 Freyja admires the 3D-printed cats that serve as her carriage-drawing beasts. Image courtesy of SolidWorks and Magic Wheelchair.

Perhaps the most prominent features of Freyja’s carriage are two giant cats that draw the wheelchair. Each about one-third the size of Freyja herself, they were modeled in xShape by Rob Jost, senior manager, Product Definition, SolidWorks.

Todd Blacksher, a resident of Lincoln, NE, and a SolidWorks user, loves to bring his Corgi Ash along in his outdoor adventures. However, in 2020, he discovered Ash was losing his hind-leg strength due to degenerative myelopathy (DM).

Blacksher also owns a Sindoh 3D WOX1, a 3D printer for casual use, designed to print in filament. So he designed a detachable set of wheels and skis for Ash’s hind legs.

“I modeled the assembly so that I could fine-tune the height of the skis. There is often a chance of walking through a patch with little or no snow, so I wanted the wheels to always be in contact with the ground,” says Blacksher.

In real-world testing—which meant during his outing with Ash—Blacksher discovered some areas for improvement.

“During a walk, Ash got one of his skis caught in a small tree limb that was on the ground, which caused the entire assembly to twist and crack the small adapter,” Blacksher says.

For version 2.0, Blacksher reprinted a stronger adapter with solid infill. In the original design, the assembly attaches to the small adapter with a pair of small pan head machine screws and wingnuts.

“I wanted to be able to attach and detach the skis without screwdrivers, so I reprinted the adapters with a small cutout to capture the hex head of the new machine screws,” Blacksher says.

He found that the Print3D feature in SolidWorks was a big help. “The ‘Build Analysis’ portion highlights the faces that require supports, which allowed me to adjust the design until it did not require supports,” he recalls. If Ash’s DM progresses, Blacksher is determined to continue tweaking the design.

“The subdivision command really helped me, especially around the eyes,” he says.

The creatures were much too big to fit into a 3D printer’s typical print chamber, so they were printed as separate pieces.

“I counted them. There were 53 different body parts for the cats,” Jost says.

The team used 3DPlay, a 3D model-based collaboration app in the 3DEXPERIENCE portfolio. “It was extremely helpful to see the cats as [they] progressed in 3D to provide input on the look, poses and scale,” says Lama.

The castle-carriage was unveiled to Freyja and her family during her 10th birthday party. She named her carriage-drawing cats Annie and Christine.

(Editor’s Note: A version of this story was published online under the name “How to Build a Castle-Carriage for a Princess,” November 2021).

A Canvas for Self-Expression

Albert Manero, co-founder and president of Limbitless Solutions, is also director of the Office of Research Operations at the University of Central Florida.

“I was stuck in traffic, listening to the radio and they had an interview with a gentleman who built the first 3D-printed mechanical hands. I came into my research lab and I said to everyone in my lab: ‘I have to be a part of this,’” he says, explaining the genesis of his seven-year-old nonprofit.

Manero sees the arm as “a canvas for personalized expression.” The personalization begins online through its web-based customizing interface. Here, the patient picks from four templates (Warrior, Ethereal, Shadow or Serenity), then specifies the color schemes, from base plates to borders. He managed to convince video game makers to become partners, so the design (for adult arms) can also include elements from “Halo,” “League of Legends,” “Assassin’s Creed” and “Cyberpunk 2077.”

“Each participant may design at least two sleeves, which are interchangeable on a magnetic locking system for easy one-handed attachment. As we have the designs already made in a 3D modeling system, we are able to do some minor conversions and upload through our portal,” says Manero. 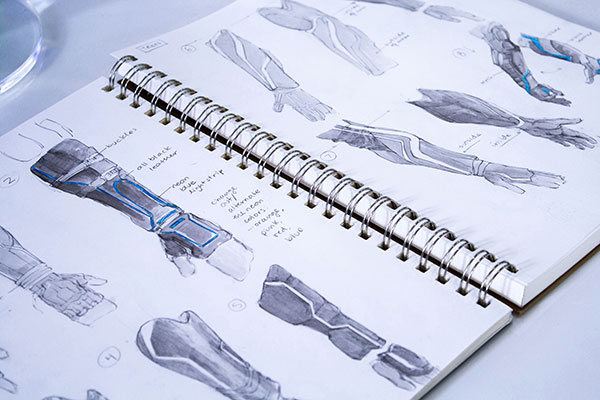 Seven years ago, Autodesk Fusion 360 was still in its infancy, but Maya was part of many university engineering and design programs; therefore, students with some experience in Maya would not be difficult to find.

“Now, all the mechanical parts are designed in Fusion 360, our manufacturing platform. They’re also using it for ECAD and plastic simulation through Moldflow,” Vanscoder says.

With the pandemic preventing physical contact with potential arm recipients, Limbitless had to find ways to adapt.

“Working quickly with our hospital partners and our university we shifted the study visit to an all-virtual component,” Manero says. “The human integration components of the arm use a photogrammetry method we developed that leverages Fusion 360. Currently, with supply chain challenges, the raw materials for the prosthetic have been affected and we continue to innovate on the design and procurement.”

“The training games interface uses a special Bluetooth electromyography controller that we provide the participants, though you can also play by tapping the screen. For character and environment design, we heavily used Maya before going into Unity,” says Manero.

“Limbitless’s mission fully aligns with Autodesk’s—to make a better world, to design a better world. They are doing it with our tools,” says Vanscoder.

Celebrating the Union of CAD and CAM
Milestone mergers and partnerships brought design and manufacturing closer.
Printing in the Fourth Dimension
Smart materials and new design capabilities will usher in a generation of self-modifying structures with applicability for medical, aerospace and various other innovative uses cases.
AI and ML Transforming Simulation
Use of artificial intelligence and machine learning algorithms in FEA increase predictive performance, speed up processing time.
Editor’s Picks: December 2-December 8, 2022
One of the picks will be chosen as DE’s Editor’s Pick of the Week.
Quick Electromagnetic Analysis of PCB Design
Autodesk Fusion 360 Signal Integrity Extension by Ansys reduces costs and improves compliance.
Autodesk Company Profile