A look at some of the finite element analysis technologies used in the aerospace industry -- and the simulation methods involved. 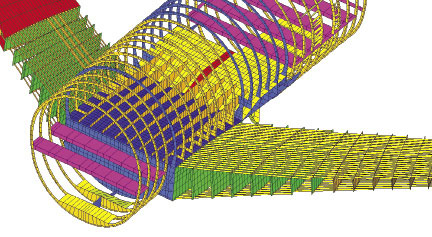 Editors’ Chat: Rise of Cloud Platforms, AWS-Powered Simulation, News from Formnext,...
DE editors discuss latest news
BETA CAE Systems Releases v23.0.2 of its Software Suite
v23.0.2 is addressed to those that would like to delve deeper into v23.x.x...
COMSOL Releases Version 6.1 of COMSOL Multiphysics
COMSOL is strengthening its multiphysics simulation platform with new capabilities for product development and innovation...
NAFEMS Event Upcoming: Simulation in the Automotive Industry
The event, to take place in early December, is focused on "Driving Convergence to Electrification,...
More Simulate

Unified Modeling and Simulation for Structure Development of Heavy Machinery and Equipment
The 3DEXPERIENCE Platform can help heavy mobile machine manufacturers innovate in a collaborative environment and...
Simulate Resources

The aerospace industry is one of the originators of finite element analysis (FEA). The company division I worked for in the UK in the 1970s was typical of that time, with roots as an independent aircraft manufacturing company. Our homegrown FEA solution was used on all our aircraft projects. The FEA solver was sophisticated, and met our specific needs. There were six to eight independent FEA solvers in the UK aircraft industry alone; the same pattern was repeated worldwide.

Subsequently, the limitations of an independent FEA solver became apparent. Maintenance, documentation and support were a burden on the engineers who originated the system. Similar problems were found worldwide, with a need for rationalization and compatibility between contractors on many major projects.

For us, the spur to abandon our own FEA solver was the Multi-role Combat Aircraft (MRCA) international project. In the U.S., one of the main drivers for compatibility was the Apollo moon project. Contractors were responsible for building and testing analysis models of their components, which were then combined into a single project model. NASA defined a common specification for FEA data and solution structure, which became NASTRAN. Later, NASA outsourced the development. Commercial FEA solvers are now almost universal.

At that time, aircraft and spacecraft FEA models were very simplified representations of the real structure. This was achieved by high level idealization: Fig. 1 shows a typical part mesh. A mix of pure shear panels and end-load carrying rods provide the only load transfer path. However, bending, torsion and axial loads can be carried effectively by this scheme.

A modern-day complaint is that we can’t develop any realistic stresses directly from the FEA model. In fact, the purpose of such a model is not to develop local stresses, but to develop load paths through the structure. Even today, many aerospace FEA models—although they use more sophisticated elements—actually function as load path models, as shown in Fig. 2. The detail stresses are developed from the internal loads found in such a model downstream of the FEA analysis.

There are two main drivers toward this mixed FEA and conventional stressing approach:

As noted, many large projects required contractors to combine models in the buildup of the complete aircraft or spacecraft structural model. The super-element technique was developed early on to facilitate this approach. There are two major advantages for this method:

This methodology has become common within the aerospace and other industries for dealing with large structural models, particularly where component confidentiality or autonomy of design is required. However, it does require disciplined analysis setup, which can become quite complex. Most large aerospace companies have evolved this as a “black box” internal process.

Fig. 2: Model of an aircraft fuselage. Image courtesy of Altair.

An alternative to super-elements is local global modeling. This can provide a bridge between the loads model and a local detail FEA stress model. Forces or displacements from the boundaries of the global model are applied to the corresponding positions in a more highly refined local model. Although this method also has limitations, it is a powerful technique.

At some point in the future, aircraft stress models will presumably use solid element meshing directly of the CAD components. The main attraction will be to eliminate the notoriously complex and time-consuming process of idealization and meshing from solid geometry to shell and beam elements. The downside to this is that models of the order of Giga (10^9) degrees of freedom (DOF) or even Tera (10^12) DOF would be required. This far exceeds the current practical limit for model size.

Fatigue failure is a result of repeated stress application under cyclic loading—often way below yield stress levels. Conventional fatigue analysis identifies stress concentration sites throughout the aircraft using linear static FEA analysis. This can be done with detail models or downstream assessment of a loads model.

The loading mechanism and history applied at the sites are critical, and require careful identification of how compressive, tensile or shear stress states combine. Vibration fatigue analysis may be required on components that see significant dynamic response, such as engine pylons and skins near jet efflux.

Fatigue analysis identifies sites in a structure where crack initiation is likely to occur. The estimate of the fatigue life is based on empirical methods fitted to test data. Fatigue analysis does not, by itself, predict any form of crack growth.

Damage tolerance assessment, on the other hand, can predict crack growth. Potential crack initiation sites are identified, and various crack shapes and sizes are assumed. Linear elastic fracture mechanics coupled with FEA solutions are used to estimate crack growth. The principle is straightforward; however, the challenge is in meshing a crack in a 2D shell or 3D solid model and then allowing automatic re-meshing of the growing crack.

Damage tolerance assessment requires a high level of mesh refinement in a local detail model. Specific sites of interest have to be selected—there is no overall process to sweep through a complete aerospace model.

Loading environments vary considerably across aerospace applications. Military aircraft sustain high G maneuvers across all corners of the flight envelope. Also, there may be many variations in external payload and fuel state that have to be assessed, with particular dynamic environments from gunfire or store ejection.

The critical cases for civil aircraft include gust response and dynamic landing. Variations of payload and fuel state must be accounted for—and each possible phasing and positioning of the aircraft in the gust and landing conditions has to be assessed. There may be hundreds of thousands of load cases to be used in assessment of the structural integrity of all components of aircraft. The sheer quantity of load cases demands specific processes to handle this volume of data and stress analysis.

Launcher and satellite structures see high inertial loading during the launch. This occurs together with a harsh dynamic environment, with random vibration loading forces being transmitted from the rocket motors up through the structure. A great deal of effort is spent on ensuring strength and fatigue life.

Aerospace vehicles are subject to aerodynamic loading. Until fairly recently, most of the loading data was calculated from wind tunnel results or well proven classical solutions. As structural configurations have become more complex and performance requirements more demanding, however, a need for greater fidelity in aerodynamic calculations has evolved: Computational fluid dynamics (CFD) now plays a vital role in modern aerodynamic simulation and loads derivation.

For initial calculations, a wing or control surface is assumed to be rigid under aerodynamic loading. However, the wing is flexible and will change its configuration with resultant perturbation of aerodynamic loading until a balanced state is reached. Steady aeroelastic FEA calculates this interaction, and allows a modified aerodynamic loading distribution to be used.

Unsteady aeroelastic analysis calculates the dynamic interaction between an oscillating airflow and a vibrating control surface. A search is carried out for critical flutter modes across the aircraft flight envelope. (Flutter is an extremely dangerous phenomenon, and is usually catastrophic.)

Thermal loading and analysis are required for structures near engines, rocket motors, etc., as well as kinetic heating of the airframe from high-speed flight. This may be done fully within an FEA solution, or an independent thermal solution may be mapped or coupled to the structural FEA.

The biggest change in aircraft design over the past 20 years has been the dramatic increase in the use of composites for primary structures. Test programs and techniques have developed to provide the supporting evidence for strength and stiffness assessment. Similarly, simulation methods have evolved to handle a new type of structure (see Fig. 3). This has been a steady evolution from classical laminate theory mapped into thin shell applications.

This works well for continuous structures such as wing and fuselage skins. However, for joints and more complex (and typically, heavier) fittings, local effects become important in a composite layup. In this case, 3D solid elements are used that allow full interlaminar and through-thickness effects to be simulated. Failure modes such as delamination and interlaminar shear would otherwise be missed.

The actual failure mode of a composite structure can be a challenge to assess. Even a simple coupon test, subject to compression and shear, results in complex microlevel failure that is not well represented by traditional failure theories. If the real structure is a skin-to-stringer joint at the edge of a panel, it can be difficult to predict failure. FEA techniques are evolving along several fronts to try and deal with these situations.

In addition, there are structural analysis techniques becoming increasingly important within the aerospace industry, including:

The biggest changes in aerospace analysis are linked to the growth of composites. However, the tremendous growth in computing speed and power is allowing a steady increase in the number of highly detailed local models of aircraft structures.

One of the biggest challenges is to be able to harness this level of model fidelity, and use it effectively within the traditional strength assessment requirement for the whole vehicle structure. At some point in the future, there will be a migration to solid-element, full-vehicle modeling that will require a rethink of the whole process.

Tony Abbey is a consultant analyst with his own company, FETraining. He also works as training manager for NAFEMS, responsible for developing and implementing training classes, including e-learning classes. Send e-mail about this article to DE-Editors@digitaleng.news.