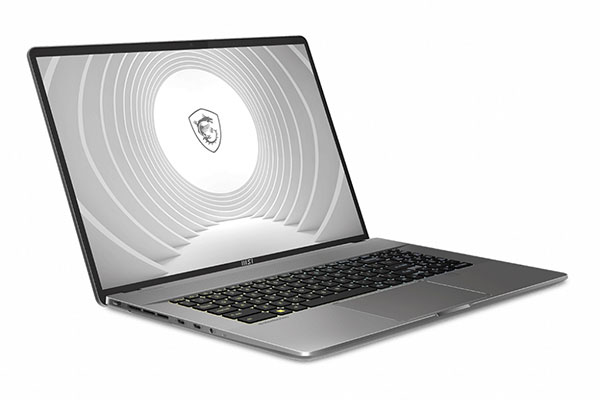 Fig. 1: The new MSI CreatorPro A17 A12UMST is a 17-in. mobile workstation with an NVIDIA RTX A5500 GPU, running Windows 11. Image and graphs courtesy of David Cohn.

Making the Case for Advanced Engineering Workstations
A new era of CPU horsepower is critical to unlocking workstation performance to meet the...
Workstations Resources

When Intel announced the 12th generation of its mobile CPUs in early 2022, we knew it was just a matter of time before we received one for review. The first to arrive comes from Taiwan-based Micro-Star International (MSI), a company that has continued to prove that it is very serious about the workstation market.

As was true for other MSI systems we have reviewed recently (such as the MSI WS66, see MSI Does It Again), the MSI CreatorPro Z17 mobile workstation we received carries independent software vendor (ISV) certifications from Autodesk, Siemens, Ansys and Dassault Systèmes, which ensures that the hardware and software are fully stable and compatible for a professional experience.

Unlike other original equipment manufacturers, however, MSI does not offer custom configurations. Instead, the company sells preconfigured systems based on specific combinations of components. As of publication, MSI has only released one configuration of its new 17-in. CreatorPro Z17. The A12UMST-097 is a 17-in. laptop based on an Intel Core i9-12900H CPU, with an NVIDIA RTX A5500 graphics processing unit (GPU), 64GB of system memory and a 1TB solid-state hard drive.

MSI set the suggested retail price at $4,500, but since it only sells its systems through authorized resellers who can decide their own prices, cost may vary.

The 12th-gen Intel Core i9 CPU, a high-end CPU for laptops based on the Alder Lake architecture, is unlike any previous generation of Intel processor. The new hybrid design features a total of 14 cores, providing a combination of Performance and Efficient-cores (P-core and E-core), which Intel claims results in better real-world performance intuitively scaled to match whatever you are doing.

Intel Thread Director, a new technology built into this 12th-gen CPU, is designed to send the right workload to the right core at the right time. It helps prioritize and manage distribution of workloads and sends tasks to the most optimized thread. This new feature is on by default and works in tandem with the OS for intelligent workload distribution. The P-cores support hyperthreading, leading to 20 supported threads when combined with E-cores. Performance of the E-cores should be similar to older Skylake cores. Overall, users should see a performance boost of up to 45% compared to systems based on the previous generation Core i7-11800H.

The clock rate for this new CPU ranges from 2.5 to 5GHz on the P-cores and 1.8 to 3.8GHz on the E-cores. All cores can use up to 24MB of Smart Cache, making the new Core i9-12900H one of the fastest mobile CPUs. The processor has a base power draw of 45 watts and 115 watts when operating maximum turbo power. The new processor, based on a 7nm manufacturing process, supports various memory types up to 4800MHz DDR5 memory, which is what MSI includes in the CreatorPro Z17. The CPU also includes Intel Iris Xe graphics. 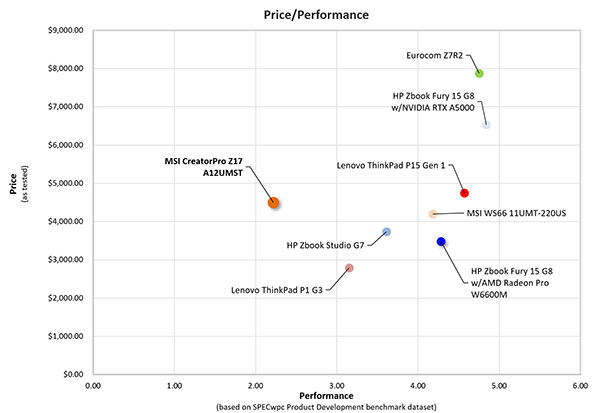 Raising the lid of this thin, lightweight system reveals the 17-in. wide-quad high-definition (WQHD+); 2560x1600 True Pixel display. This 16:10 panel is also touch-enabled and supports the optional MSI Pen ($129), which offers high precision and 4096 pressure levels for a natural writing experience. The system also features an excellent 99-key backlit keyboard with a standard layout and numeric keypad. The power button is actually the key in the upper-right corner of the keyboard. An LED embedded in that key glows white when the system is powered on. Small LEDs in the Caps Lock and several function keys are used to control sound and other settings.

An infrared webcam is centered above the display, flanked by a pair of microphones. There is no privacy shutter. A gesture-enabled 5.12x3.25-in. touchpad is centered below the spacebar. Although the touchpad lacks dedicated buttons, you can click in the lower-right corner to access right-click shortcut menus. A fingerprint sensor is located to the upper-right of the touchpad.

The right side of the case provides a built-in full-size SD Express card reader, a single USB 3.2 Gen 2 Type-A port and an HDMI port. The left side houses the port for the AC power adapter, two Thunderbolt (Type-C) ports (that support USB4, PCIe, HDMI, and DisplayPort), a combination 3.5-mm audio jack (that supports a headset, microphone or headset with microphone) and a battery status light.

The system lacks an attachment point for a security lock. It also does not have a network port, and the battery is not removable. The four-cell 90Whr battery lasted 5.5 hours on our battery run-down test. The system remained cool and quiet throughout our tests, with the internal fans barely audible above the 35dB ambient background level in our test lab.

Although the MSI CreatorPro Z17 A12UMST performed very well throughout our tests, this system is the first we have received with Windows 11 pre-installed. As such, we were unable to run several of our standard benchmarks (which are not compatible with this new OS) and the results we recorded on many of the benchmarks that we were able to run proved to be questionable.

On the SPECViewperf test, which is a measure of pure graphic performance, the CreatorPro Z17 turned in results that were much lower than expected. The same was true on the very demanding SPEC workstation performance benchmark. While we list the results for those tests that we were able to complete, we do not believe the results should be compared to those for systems running Windows 10.

MSI backs the system with a three-year warranty, two years longer than what now comes standard from many major vendors. MSI also preinstalls a free copy of its MSI Center software, which optimizes the system for use with various programs.

Once again, MSI has delivered a great, thin, lightweight mobile workstation that should deliver great performance, despite the benchmark numbers we recorded. Those looking for a 17-in. mobile workstation should be well-served by the MSI CreatorPro Z17.