WHOI and NASA/JPL are designing an autonomous sea drone capable of exploring the hadal zone, up to almost 7 miles below sea level.

WHOI and NASA/JPL are designing an autonomous sea drone capable of exploring the hadal zone, up to almost 7 miles below sea level. 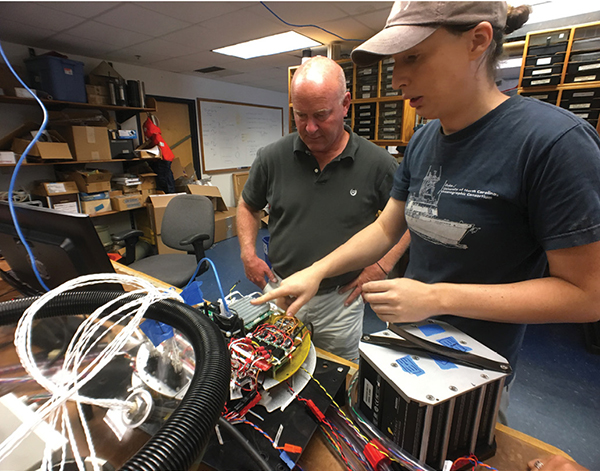 Simulation of Ultrasonic Non-Destructive Testing of Composite Materials
This white paper provides an overview of how different NDT techniques can be modeled and...
Components Resources

What does the hadal zone, the deepest parts of Earth’s oceans, have in common with extraterrestrial water bodies? Apparently a lot, which is why researchers at the Woods Hole Oceanographic Institution (WHOI) and the NASA Jet Propulsion Lab (JPL) have teamed up to design an autonomous drone capable of plumbing near-bottomless ocean depths for signs of life.

Project Orpheus is a prototype autonomous vehicle being built with the long-term goal of exploring the hadal zone, an uncharted area 6,000 to 11,000 meters (3.7 to 6.8 miles) under the sea. It’s comprised of trenches and troughs and thought to be home to unknown forms of life. The pressures in the deep waters of the hadal zone map closely to the environment of extraterrestrial waters, especially those of Jupiter’s Europa moon, which was the impetus for NASA to sign on as a key Orpheus design partner. 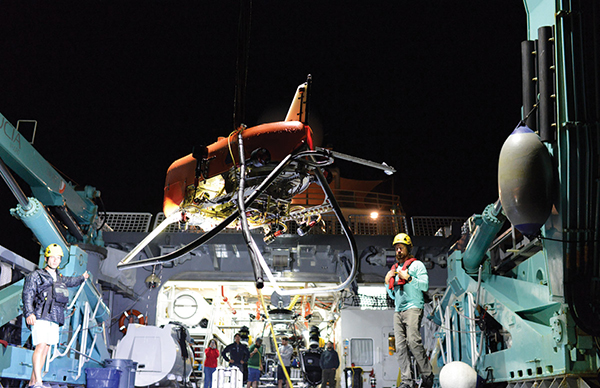 “NASA’s main interest in Orpheus and related technology has to do with the ocean worlds beyond our earth that have liquid water on the surface or underneath large ice coverings,” explains Andy Klesh, chief engineer for interplanetary small space craft at NASA. “If we can build an [autonomous vehicle] for finding life on Earth’s oceans, we can [use it to] go and explore signs of life on distant planets.”

WHOI initiated the Orpheus autonomous vehicle project after they lost their Nereus hybrid deep-ocean remotely operated vehicle on an experimental 10,000-meter dive in the Kermadec Trench northeast of New Zealand in May 2014. The vessel, which weighed more than 7,000 lbs. and cost over $5 million, likely imploded under pressure as great as 16,000 lbs. per square inch (psi) and was never recovered.

As a result of that stunning loss, the WHOI team went back to the drawing board with the goal of designing a lighter weight, simpler vehicle that would cost less and be easier to recover, according to Casey Machado, research engineer for the Applied Ocean Physics & Engineering team at WHOI and the lead mechanical engineer on the Orpheus project.

“We didn’t want to lack access again, but we also didn’t want to drop in a dumb platform that sinks to the bottom and floats back up with no mobility capability and just be lucky enough to land on something interesting,” Machado says. “We decided to take the funding available and go back to the drawing board to regain access to the zone in a way that was beneficial to science.”

In January, Leidos announced that the Office of Naval Research (ONR)’s Medium Displacement Unmanned Surface Vessel (MDUSV), Sea Hunter, became the first ship to successfully autonomously navigate from San Diego to Pearl Harbor, HI, and back without a crew member onboard, except short duration boardings to check electrical and propulsion systems. 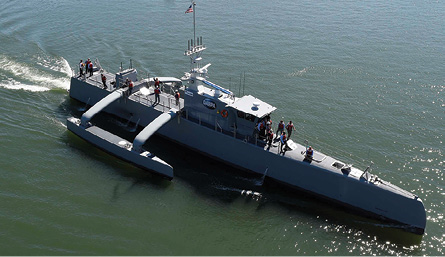 Leidos designed and built the 132-ft.-long Trimaran, Sea Hunter, which it says is the first autonomous, unmanned vessel capable to travel for long periods of time and execute a variety of missions at a fraction of the cost for a manned ship.

“The Sea Hunter program is leading the world in unmanned, fully autonomous naval ship design and production,” says Gerry Fasano, Leidos Defense Group president via a press release. “The recent long-range mission is the first of its kind and demonstrates to the U.S. Navy that autonomy technology is ready to move from the developmental and experimental stages to advanced mission testing.”

Sea Hunter will continue long duration and mission package testing throughout 2019. ONR awarded Leidos a potential $43.5 million contract to develop Sea Hunter II, which is under construction in Mississippi. The sister ship will be updated based on lessons learned during the first Sea Hunter build, evolving mission requirements and development of autonomy enhancements.

“Our talented team of engineers, scientists and analytical experts have decades of experience that will allow us to deliver a second highly autonomous vessel designed to keep our servicemen and women safe while monitoring the maritime environment,” added Fasano.

The team also wanted to build something that was accessible—not a research vessel that would require hundreds of thousands of dollars a day to operate.

As part of the early design work, Machado and team brainstormed on a white board and then translated those early concepts into 3D CAD models for further iteration. Whenever possible, they chose to spec hobby- or commercial-grade components along with a significant reliance on open source software, such as an aquatic open source program that mimics what is used for aerial drones, she explains.

“All the fundamental things the vehicle has to do—drive around or turn lights or cameras on and off—all that foundational functionality is accomplished through open source software,” Machado says. “From there, anyone can do what they want in terms of adding complexity.”

To survive under ambient pressure conditions of up to 16,000 psi, Orpheus’ lightweighting goals required system components to be strong enough to withstand pressure on their own as opposed to employing sealed atmospheric enclosures for protection—a design choice that significantly increases vehicle weight.

The team substituted a much smaller 17-in.-diameter glass sphere, which serves to wall off and protect any components—batteries, for example—that can’t be exposed to sea water without adding substantially to the structure. Thanks to the lightweighting and off-the-shelf parts strategies, the current Orpheus prototype tips the scale at just under 600 lbs.

JPL/NASA’s principal contribution to Orpheus is the autonomy, vision software and control electronics, with much of the algorithms adopted from what was developed for the Mars missions. JPL/NASA also contributed to the miniaturization work, specifying off-the-shelf commercial components used in toasters, cars and cell phones, Klesh says.

By applying the same commercial off-the-shelf technology used in drones to the autonomous vessel, the JPL/NASA and WHOI teams were able to significantly lightweight Orpheus, which will be essential when some version of the autonomous vehicle is deployed for space ocean exploration some point down the line.

In addition to the JPL/NASA artificial intelligence-driven image processing capabilities, sensors and cameras are key to Orpheus’ intelligence and autonomy. The combination helps the vessel navigate on its own and recognize if it has traveled somewhere before—an achievement that will be essential for future generations, which are being developed to work as an autonomous drone fleet both within Earth’s ocean depths and in space waters.

If you couple the image processing intelligence “with capabilities for sensing water chemistry, temperature or biological sensing, you have a recipe for how to look and find life in the ocean,” Machado says. “Orpheus can fly around in autonomous mode, sense various chemicals or venting hot fluid, and determine what the source is.”

Although still quite sophisticated, autonomous operation in the ocean is less onerous than creating systems for land vehicles like cars, according to Ahmad Haidari, global industry director at ANSYS. “From a design perspective, both have safety and reliability concerns, but the consequences are different,” he explains.

Because of all the permutations in an on-road scenario, such as pedestrians crossing the road or being cut off by another vehicle, he says, simulation is central to understanding the full environment. “There are so many permutations that [physical] testing this would be impossible,” he explains. “Simulation takes what’s happening on the vehicle and what’s happening in the environment and puts it together.”

Apart from the complexities developing the autonomy capabilities, WHOI used a more hands-on approach to building and testing the physical Orpheus components. The team made liberal use of WHOI’s fabrication department and machine shop to produce the bulk of componentry in-house.

In lieu of robust simulation and analysis, the WHOI team used “back of the envelope” calculations to estimate drag and figure out battery and power requirements, Machado says.

“Doing computational fluid dynamics (CFD) is time-consuming and can be really expensive. In this case, we could learn quite a bit just by putting Orpheus in the water and seeing what happens,” she says. “When you’re building a submarine that costs millions of dollars, there’s a higher risk threshold.”

In September 2018, researchers launched Orpheus’ maiden voyage in the waters outside of Cape Cod Bay. The goal of the first expedition was limited in scope: Get the vehicle in the water, ensure the four cameras and data collection systems worked, and test a key aspect of its autonomous mission—the release of steel weights that fall to the sea floor so the drone will surface for recovery.

With the initial expedition deemed a success, WHOI and JPL/NASA are pursuing their joint mission to evolve the current Orpheus into a next-generation autonomous vehicle capable of extraterrestrial exploration.

“Think of this as the great, great, great, great grandfather or grandmother of what we will eventually set out to do on Jupiter’s Europa moon,” Klesh says. “We are evolving the technology and techniques and learning through this, but it’s certainly a far-away descendant.”

Editor's note: The expedition that Orpheus was tested on aboard the M/V Alucia was made possible through the Bloomberg-OceanX partnership and pledge of a combined $185 million over the next four years to facilitate ocean exploration and conservation around the world. Through the partnership, Bloomberg Philanthropies and OceanX aim to create a critical platform to increase the world’s collective understanding of and engagement in our oceans.