Thousands of attendees delve into 3D printing, the future of manufacturing, digital twins, data management and so much more.

Thousands of attendees delve into 3D printing, the future of manufacturing, digital twins, data management and so much more.

RAPID+TCT took place May 20-23, 2019, at the Cobo Center in Detroit. Shown here is the opening reception for attendees within the convention center. Image courtesy of RAPID+TCT/SME.

Achieving Top Quality and Speed, in Simulation for Crash Test Dummies
Designing occupant friendly interiors that meet requirements in both safety and style, necessitates the extensive...
Post-Processing and Finishing Resources

The RAPID+TCT 2019 annual conference and trade show, produced by SME, convened on May 20-23. Several thousand attendees and 400-plus exhibitors had access to more than 100 additive sessions in the Motor City of Detroit, home to GM, Ford and Chrysler.

Though autonomous vehicle technology and 3D printing’s role in automotive surfaced as relevant topics at the show, the auto sector was just one focal point among many on the 3D printing landscape being discussed at the event. 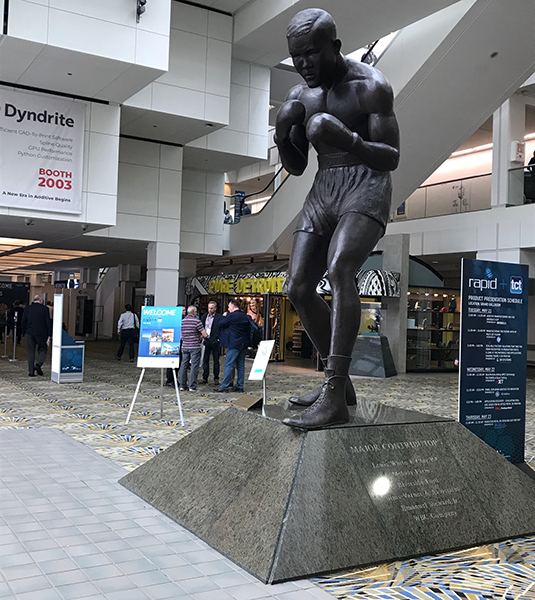 “This event is an annual celebration of additive manufacturing and the achievement and dedication of this community,” 2019 SME President Mark Michalski said in his opening remarks. “In just one generation, this technology has moved from a product in concept to mainstream adoption.”

The event kicked off with a sports-targeted application of 3D printing technology, a collaboration between Carbon and Riddell to create customized PrecisionFit football helmets using 3D printing and 3D scanning technology. The companies’ partnership enabled Carbon to design and incorporate lattice structure technology into Riddell’s helmets. DE published a news brief on this earlier in 2019.

A returning attendee favorite, Todd Grimm of T.A. Grimm and Associates, gave his annual “what’s new and what’s next” at RAPID+TCT 2019, providing a snapshot of what he viewed as standout technologies present on the show floor at the Cobo Center. Companies earning his mentions represented everything from nonmetal material extrusion hardware to metal binder jetting technology to powder bed fusion and directed energy deposition platforms to preprocess and post-process software, and 3D scanning. 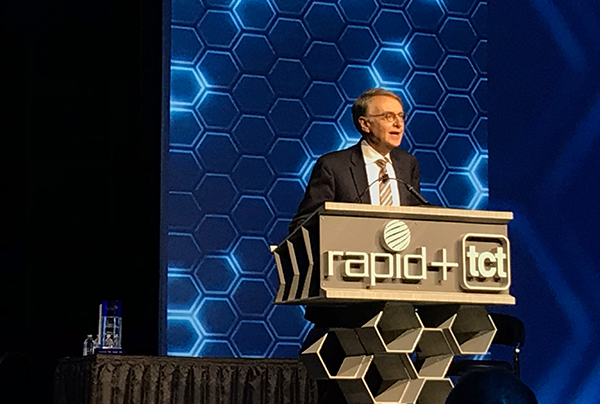 Also on the opening day, RAPID+TCT and SME gave the Innovation Achievement Award to Emanuel “Ely” Sachs, who’s recognized as a pioneer of 3D printing and inventor of binder jet printing, co-founder of Desktop Metal, and professor of mechanical engineering at MIT.

“If you look at the history of manufacturing, it’s a rare opportunity to participate in as fundamental a change from the past,” he said, humbly reflecting on his career to date.

“On the business owner side, the digital manufacturing piece is massive from a change point of view.” Innovation cycles of products “will absolutely accelerate,” Schell said. “But it also means the time to make a profit on an application on a new product is shortened as well. You need to launch and you need to make a profit very quickly because you know somebody else is going to disrupt you in a very short period of time.”

Beyond shortened cycle times, he said the competitive environment is changing as well, with barriers to entry disappearing. “You will see a lot of new businesses enter into domain and industrial expertise. That means part of the protection of some of the established players will go away.”

Managing data can be as simple as managing the additive manufacturing decisions that come your way on a daily basis, according to Susan Smyth, Ph.D., SME president-elect. She announced at this year’s show that SME and RAPID+TCT are launching an early version of an additive advisor system.

“The most fundamental questions that should be asked when you are looking at a new manufacturing process are quite simple: can I make it? Should I make it?” The iRAMP (Interactive Rapid Additive Manufacturing Portal) advisor version that is available now was designed to help answer the first question, according to Smyth. It’s a tool that supports significant additive manufacturing decisions. 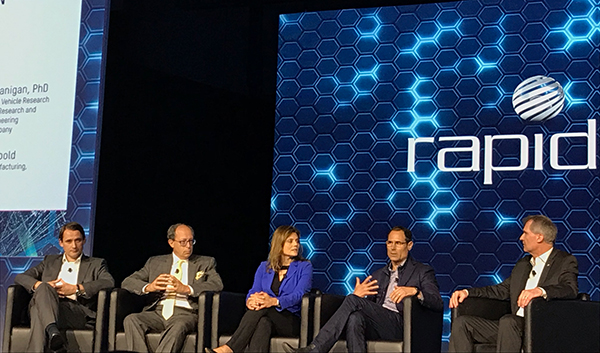 Dulchinos kicked things off with an obstacle. “One of the challenges today is if you design for additive you don’t have a backup plan to go produce in a traditional manufacturing process. That’s problematic, because there isn’t really a rich supply chain today. We’re really big advocates around open systems, around having partnerships and ecosystems that come together to set standards and be able to allow us to trust that we can produce on a global scale and get the same repeatable results,” he said.

During the discussion, Wohlers asked panel members to consider trends that will emerge in the future regarding expansion, noting that the companies the panel members represent will likely manufacture high volumes in the future. As growth occurs, that likely means great capacity—with many machines in many locations.

“As you watch this unfold at Siemens, Ford, Honeywell and Jabil, and you look at hundreds of machines at multiple sites, what are going to be the biggest hurdles in making that happen?” he asked.

Godfrey said Honeywell has taken two paths. “A lot of people will talk design for additive manufacturing. You can do that—and we are. But you can only do that for new products. FAA is not going to allow you to change the shape of an existing component. We are printing designs. We call it Made for Additive Manufacturing. We make the exact same shape. For the next 5 years, we’re not looking for vendors to design for us; we’re looking for vendors to print for us.”

What’s holding vendors back? Financial resources, according to Godfrey.

Another potential obstacle relates to the trend of digitalization, according to Flanigan from Ford, which has been using AM since 1988. “As we move [as a whole industry] to additive manufacturing and think about what that future looks like, we have to look at having a physical and digital twin, making sure each site has the same capabilities, in terms of process control, environment, etc.,” she said.

When smaller startup companies want to get engaged but do not have financial resources to ramp up their manufacturing capabilities with regard to additive, Flanigan said this presents an opportunity for larger companies to work alongside them in partnerships or with the help of a collection of companies “to assess if there’s some unique aspect that could bring additional value such as a new material system or a new process, something to enable us to maybe develop personalization.”

As Dulchinos sees it, design is going to be a central part of additive manufacturing. “Additive is just a new manufacturing process. It doesn’t have that level of maturity yet, and the tools, skills and resources needed to make that product.”

“Additive manufacturing, when you think about it, is not just about materials and processes, it’s about the design,” Flanigan added. “It’s a way to shift our mindset in how we approach solutions.”

The panel ended with Wohlers asking panelists to name the biggest trend to impact the future of additive.

Dulchinos’ “megatrend”? The move to production. “It’s going to be driven by solutions that can foster that—open systems, qualified solutions.”

Flanigan, in the automotive space, speaks to the combination of design for additive and automotive grade open source materials. “We can really open our minds up to approaching the problem with systems engineering thinking and what are we trying to solve. It changes the whole space in how we think about delivering that component in the future.”

In his response, Godfrey cited an example of Honeywell printing a part in production in Phoenix that is 70% cost reduction of the same part being printed in Taiwan. “People think of going to Asia as a low-cost region. When you do additive, power is a commodity, machine is a commodity, electricity for all intents and purposes is a commodity, shielding gas is a commodity. The variable is the labor rate you use of the guy/gal who loads and unloads the machine.”

In the next 10 years, Godfrey predicted this technology will be a “major disruptor” of the global supply chain, noting that it costs no more to print in the United States than anywhere else in the world. 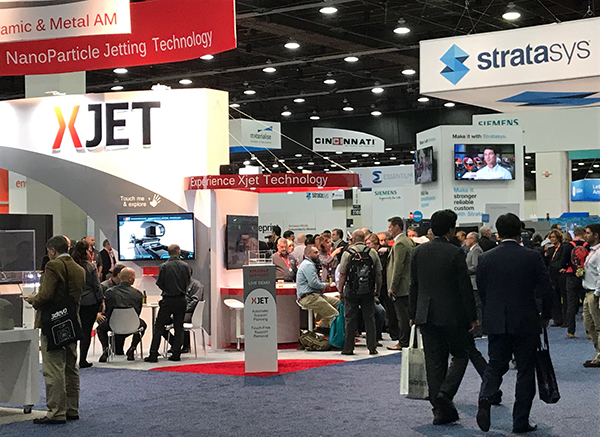 The exhibitor hall was buzzing with activity surrounding all the new innovations on the floor of the Cobo Center in Detroit.

As always, new product highlights were all the buzz at the show. Following are some examples:

Markforged launched Blacksmith software that uses AI to adjust 3D printers. The software is designed to make manufacturing machines “aware” so they can automatically adjust programming to ensure every part is produced as designed.

Sandvik Additive Manufacturing says it has created the first ever 3D-printed diamond composite for a range of industrial uses.

Materialise NV has partnered with HP, Nikon and Essentium to bring improved productivity and connectivity to additive manufacturing operations.

Jabil wasn’t the only one with racing news.

Stratasys announced it inked an agreement with Arrow Schmidt Peterson Motorsports, which competes in the NTT IndyCar Series. The team is using the Stratasys’ Fortus 450mc 3D Printer—capable of printing carbon fiber-reinforced FDM Nylon 12—and F370 3D Printer as part of its manufacturing process. 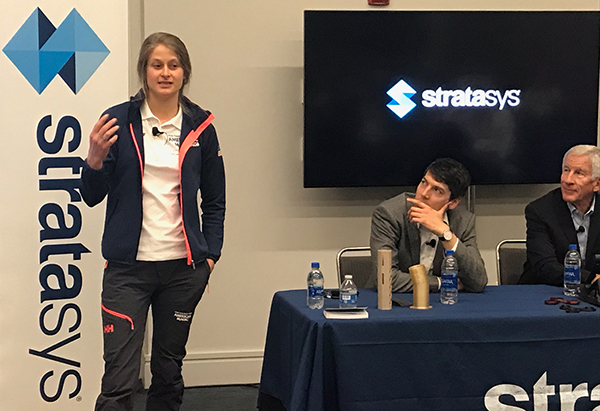 Robyn Lesh, mechanical engineer and part of the design team of America's Cup, discusses how American Magic is incorporating the Stratasys 3D printer for prototypes, brackets and more.

On the machinery side, ExOne reported that Kennametal is now a beta customer for the new ExOne X1 25PRO Production Machine. ExOne also announced a material partnership program, and collaboration with Sandvik Additive Manufacturing.

Materials were not forgotten at RAPID+TCT as DSM and Adaptive3D announced they are partnering to commercialize 3D printing photopolymer. DSM plans to help produce, distribute and sell Adpative3D's Soft ToughRubber.

Nanotechnology got some press with XJet’s announcement that its 3D Printed Antenna will allow the University of Delaware to unlock the 5G network. The XJet NanoParticle Jetting technology can help solve the manufacturing and performance issues of Passive Beam Steering for superfast antenna applications.

Stephanie is the Associate Editor of Digital Engineering.