DE readers provide an update on their use of engineering technologies.

DE readers provide an update on their use of engineering technologies.

Autodesk to Bring Sustainability Assessment Tools in Partnership with Makersite
Design software maker developing integrated LCA tools
Tools that Build Sustainable Products
Design solutions are emerging that can help integrate sustainability.
Why BOM Management Matters
Late product introductions and wasted time are a couple of the negative consequences of a...
What’s Wrong with Product Design and Development?
Looking for answers at the intersection of technology, process and business.
More Compliance

How Smart Plastics Decrease Plant Downtime while Ensuring Process Conformity Through Industrial IoT
igus creates "built-in" sensor technology with the development of "smart plastics" which bring intelligent monitoring...
Designing for Communication Systems
In this special digital issue, we compile articles and other content focused on designing for...
Compliance Resources

This has been a very strange year for everyone in just about every market segment, so we here at Digital Engineering were curious what the results of our annual Technology Outlook Survey would look like compared to 2019, especially as we conducted it in October—8 months into a global pandemic that had caused widespread economic turmoil, and a month away from a U.S. presidential election that was generating quite a bit of uncertainty in many markets.

The good news is that engineers are holding steady in their embrace of new technologies. We saw a few changes, such as collaboration being cited as more of a challenge, and a drop in adoption of some of the more leading edge technologies we cover. That was to be expected. However, overall there were no dramatic drops in interest in emerging technologies. When you look at the overall health of the vendors in this space, we have continued to see growth and innovation as well. There has been continued demand for design and simulation technologies despite economic upheaval, and even with winter approaching, things do not appear to be slowing down. 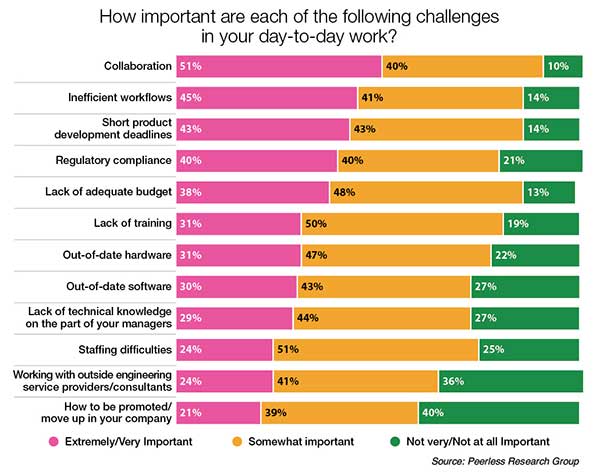 How important are each of the challenges in your day-to-day work? Image courtesy of Peerless Research Group. Click here for a full-size version,

As we did last year, we asked Digital Engineering’s audience for their perspectives on the current and future technologies that are shaping design engineering work, along with the products and systems that they are designing.

For the past three years of this survey, collaboration has been listed as an extremely/somewhat important challenge in the day-to-day work of design engineers. That has become even more apparent in the current climate, with a global pandemic forcing remote work upon engineers who previously worked in close quarters with colleagues and were able to travel to customer locations. Collaboration was listed as the top challenge again being cited as a very or somewhat important challenge by 91% of respondents (up from 87% last year). The second most common challenges were short product development deadlines, inefficient workflows and lack of adequate budget, which tied at 86%. Lack of training came in third at 81% (up from 79%) and regulatory compliance at 80% (up from 74% last year). 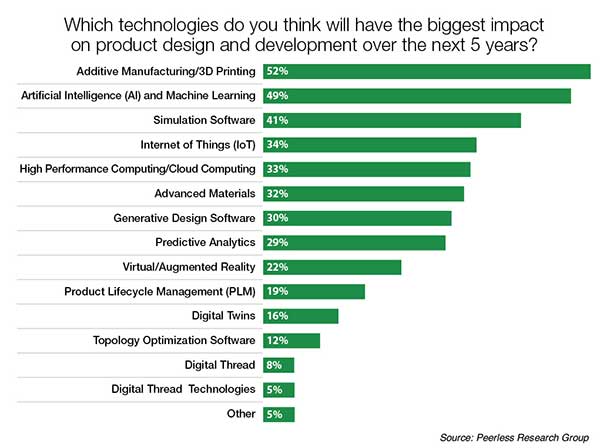 Which technologies do you think will have the biggest impact on product design and development over next 5 years? Image courtesy of Peerless Research Group. Click here for full-size version.

When asked what technologies they thought would have the biggest impact on product design and development over the next 5 years, respondents cited additive manufacturing/3D printing at 52% as the top innovation. Artificial intelligence (AI) and machine learning came in second at 49%. Both of these technologies took the top spots the past two years (although they have switched positions each year). 3D printing received a significant amount of good press this year via companies leveraging the technology to address short-term supply chain disruptions. 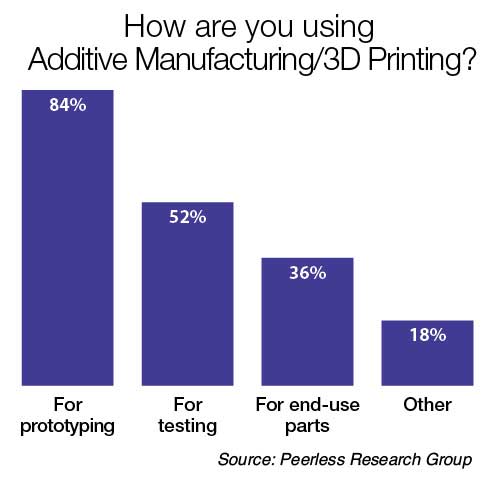 How are you using additive manufacturing/3D printing? Image courtesy of Peerless Research Group.

Virtual/augmented reality dropped from 32% last year to just 22% of respondents this year. This was also not surprising given the instability of that particular segment, with several companies being acquired or filing for bankruptcy and the lack of adoption outside of the gaming sector.

Simulation on Top of the Technology Toolbox

We also asked readers what technologies they were currently using or developing products for, as well as which technologies they expected to adopt or develop in the next two years. As was the case last year, simulation software held steady as the technology that readers were most likely currently using/developing products for, with 57% of respondents reporting that they were doing so (up from 54% last year). Additive manufacturing/3D printing was second at 44% (up from 39%). Those were followed by PLM (34%), IoT (31%) and a tie between HPC/cloud computing and advanced materials at 27%.

Looking ahead, 28% of respondents planned to incorporate AI/machine learning within the next two years. Generative design came in second in terms of future plans at 26%, followed by HPC/cloud computing (24%), additive manufacturing/3D printing (23%) and advanced materials and virtual/augmented reality (both at 22%).

Additive manufacturing/3D printing still remains primarily a prototyping tool for 84% of recurrent users (pretty much identical to our findings the past two years). Testing dropped from 57% to 52% of users this year, as did end-use parts applications (falling from 39% to 36%). The additive sector was hit hard over the past year as pandemic-related shutdowns put a damper on new pilot programs and equipment purchases.

Incorporation of artificial intelligence and generative design technologies is still relatively low in the engineering space, with just 15% of respondents currently using generative and 16% using AI/machine learning. Adoption plans have also slowed a bit (perhaps because of the economic downturn), with just 26% planning to utilize generative design (on par with last year’s figures) and 28% planning to implement AI (down from 32% last year).

Impressions of AI and machine learning varied, with some respondents seeing great potential and others remaining unconvinced. Some respondents indicated that the use of AI could provide new ways to evaluate designs.

As one respondent noted: “I feel that AI is overhyped. It has a place, but like most technologies, AI is only going to be as good as the input data. If your problem falls within the bounds of the training data, it can give good results. But if you get too close to the edges or even outside of the training data, it can give misleading or incorrect outputs. So it is another tool that needs to be understood and have its limitations known ahead of time.”

Asked their impressions of generative design software, respondents seemed to think it could provide new efficiencies and the ability to simultaneously generate multiple CAD-ready options, and that it could shorten the path to market and optimize costs for deployment.

One respondent indicated it had great potential to streamline designs, but that it was “difficult to get good designs as slight misunderstandings of boundary conditions result in very poor structures.” Others believed the technology was too intertwined with 3D printing to be useful in their applications.

“The idea is neat, especially when paired with 3D printing to create all of the strange resulting shapes. But for products that are currently built from extruded tubes, rolled sheets, etc., it will be hard to make generated alternatives cost competitive. They will find a niche where weight is a major consideration,” said one respondent.

Another high-profile but low-adoption technology was the digital twin, which has been implemented by just 9% of respondents, while 19% plan to deploy. According to the data, 33% of respondents do not know what a digital twin is, and 22% were unsure what it was. 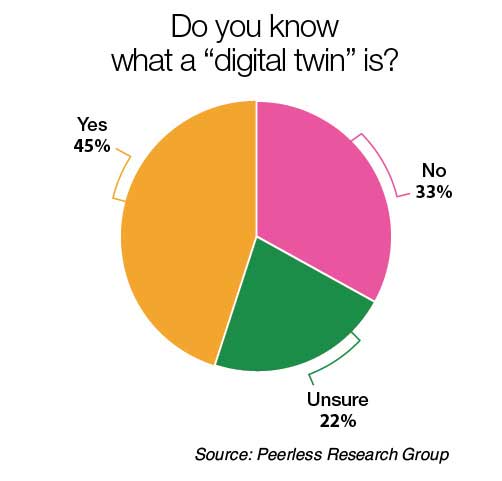 Do you know what a digital twin is? Image courtesy of Peerless Research Group.

The Revolution Will be Simulated

While respondents last year were slightly less bullish on 3D printings ability to revolutionize the design engineer process, the technology improved its score with 61% strongly agreeing (compared to 59% last year). Simulation-led design also improved from 51% to 53% this year.

More than a third (38%) strongly agreed that the democratization of high-performance computing would revolutionize design, followed by big data/analytics and generative design.

“Additive manufacturing is the foundation of the 21st century industrial revolution,” one respondent wrote. “Additive manufacturing will plug and play in generic assembly lines. The print is where the parts are made. The generic JIT assembly line will create products on demand near to the location where they will be used. Generic manufacturing depots will have 3D printing and JIT assembly and be able to print and assemble on demand. This will revolutionize supply chains in the future as optimal supply chain networks emerge with a renewed idea of channel assembly. Our supply chain networks will be modularized and hyper-modularization will follow on after 3D printing and JIT assembly nodes start to come into focus.” 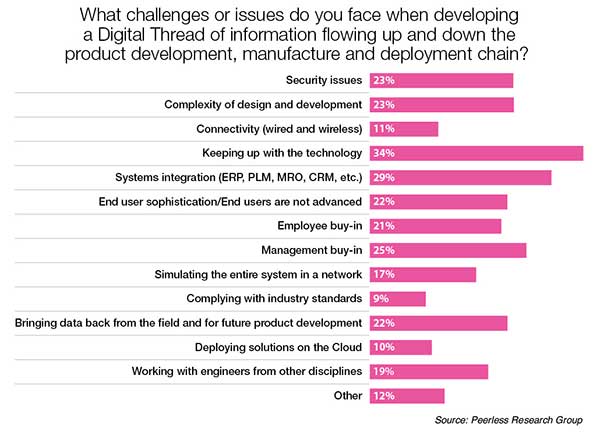 What challenges or issues do you face when developing a digital thread of information? Image courtesy of Peerless Research Group. Click here for full-size version.

More than 30% of respondents claimed to not be familiar at all with digital thread or digital twin technology, and nearly a quarter were not familiar with topology optimization.

The vendors in all of these sectors still appear to have a lot of work ahead of them in educating the marketplace about these products, and how to effectively use them.