The NVIDIA RTX A6000 outperforms its predecessor.

The NVIDIA RTX A6000 outperforms its predecessor.

The performance of the NVIDIA RTX A6000 compared to the Quadro RTX 6000. Chart courtesy of David Cohn.

Making the Case for a Workstation-Centered Workflow
The heart of an efficient engineering workflow is a professional workstation.
Sponsored Content 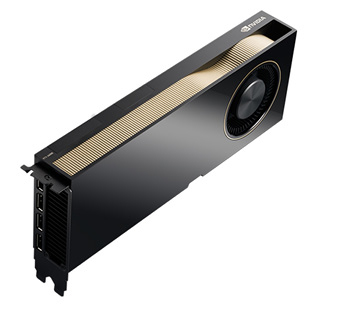 With 48GB of discrete memory, the RTX A6000 offers the largest memory available in a single GPU and is expandable to 96GB using NVLink to connect two GPUs.

The board became available at the end of 2020, and we received a unit to review earlier this year. Those familiar with the previous generations of professional graphics solutions from NVIDIA may have noticed the lack of the Quadro name for the RTX A6000.

While NVIDIA has stopped using the Quadro brand name to identify its professional solutions, the RTX A6000 offers all the professional features and benefits users have come to expect from previous Quadro products. The RTX A6000 features the same hardware and software certifications and uses the same drivers for professional applications.

The new Ampere architecture provides a “giant leap in performance,” according to NVIDIA. Fabricated on Samsung’s 8nm NVIDIA custom process, the board packs 28.3 billion transistors into a die size measuring 628.4 mm2, compared to 18.6 billion transistors packed into 754 mm2 using a 12nm process in the Quadro RTX 6000.

The SM features double the 32-bit floating point (FP32) performance compared to the previous generation. Graphics and compute operations and algorithms benefit from the FP32 improvements as do modern shader workloads and ray tracing denoising shaders. The heavier the ray tracing rendering workload, the bigger the performance gains relative to the previous generation, according to NVIDIA.

The RTX A6000 GPU is essentially three processors in one: a programmable shader, the RT Core that accelerates ray-triangle and ray-bounding box intersections and the AI processing Tensor Core. The NVIDIA Quadro RTX 6000 was the first GPU to combine all three processors, which lays the foundation for the future of real-time ray tracing (RT) and the move away from rasterization, a technology invented in 1974. Ray tracing brings a level of realism far beyond what was possible using rasterization.

During the introduction of the RTX 6000 at SIGGRAPH 2018, NVIDIA CEO Jensen Huang stated that, “the arrival of real-time ray tracing is the Holy Grail of our industry.”

The new RTX A6000 performs two shader calculations per clock versus one in the previous generation. The second-generation RT core doubles ray-triangle intersections over the RTX 6000. And the third-generation Tensor core automatically identifies and removes less important deep neural network (DNN) weights and processes the sparse network at twice the rate of its predecessor.

The RTX 6000 was the first to enable acceleration for real-time RT and professional final frame rendering using industry-standard rendering engines such as Arnold and Vray. The new board provides even faster ray-traced rendering performance. A single RTX A6000 board can render complex models with physically accurate shadows, reflections and refractions. Ray tracing is up to twice as fast compared to the RTX 6000. The A6000 also supports hardware-accelerated motion blur.

Motion blur is used to enhance the final image’s realism when users render moving objects. Because the shutter systems on physical cameras cannot freeze the motion of moving objects, motion blur occurs naturally in still images and movies, helping to convey movement and giving the viewer clues about the speed of objects.

With the introduction of accelerated motion blur on the new RTX A6000, artists can take advantage of the higher quality provided by rendered motion blur, with less impact on render times. In one example quoted by NVIDIA, it took 291 seconds to render a scene with motion blur using the RTX A6000 versus 841 seconds on the RTX 6000.

Like its predecessor, the new NVIDIA RTX A6000 is a full-height, full-length, dual-slot board with four DisplayPorts. Gone, however, is the VirtualLink connector, a USB Type-C port included on the first-generation Quadro RTX boards to attach virtual reality (VR) headsets. Still, the A6000 is VR-ready and can drive up to four 4K displays at 120Hz, four 5K displays at 60Hz, or two 8K displays at 60Hz.

As previously mentioned, the NVIDIA RTX A6000 includes 48GB of GDDR6 error-correcting code memory, compared to 24GB in the Quadro RTX 6000. The amount of GPU memory directly impacts the size of datasets that can be visualized or analyzed. The A6000 provides 10,752 compute unified device architecture (CUDA) cores (compared to 4,068 in the RTX 6000). There are actually fewer Tensor Cores in the A6000 (336 compared to 576 in the RTX 6000), while the number of RT Cores has increased from 72 to 84.

The new RTX A6000 consumes a bit more power than the RTX 6000 (300 watts versus 260 watts). While the RTX 6000 used a 14-pin PCIe auxiliary power connection, the A6000 has a single eight-pin EPS (entry-level power supply) power port that can be connected directly to the system power supply. NVIDIA supplies an adapter so that the board can be powered by two 8-pin PCIe power cables if an 8-pin CPU power cable is unavailable.

The new third-generation NVIDIA NVLink allows peer-to-peer communication between two RTX A6000 GPUs at speeds of up to 112.5 GB/s. The new board is also the first NVIDIA professional graphics board to support PCI Express Gen 4, which provides up to twice the bandwidth of the previous generation.

With the arrival of the NVIDIA RTX A6000, we quickly set about the task of testing the new board and comparing it to the previous generation. We used SPECviewperf 2020, the latest version of this graphic benchmark, and tested both boards using a Lenovo ThinkStation P620 workstation powered by a 2.7GHz AMD Ryzen Threadripper Pro 3995WX 64-core CPU and equipped with 32GB of 2666MHz DDR4 error-code correcting (ECC) memory.

Like all previous NVIDIA Quadro boards, the RTX A6000 is independent software vendor certified, and its unified video driver is available for 64-bit versions of Microsoft Windows 10, 8.1, 8 and 7; Windows Server 2012, 2016 and 2019; and Linux, Solaris x86 and FreeBSD. The new board is also backed by a three-year warranty.

Once again, NVIDIA has introduced a new GPU that delivers unprecedented levels of performance.